The Ford Everest is a midsize SUV that has reached a new level of rugged capability and refinement for its mid-cycle refresh. It's now offering a combination of stylish design, modern technology, balanced on-road and off-road capability, and the touted premium interior refinement. Because of this, the American SUV consistently retains its status as one of the Blue Oval's best-sellers.

Known to be one of the toughest SUV in the segment, the Everest is built on a true body-on-frame chassis – matched with a 225mm ground clearance and 800mm water wading capacity, allowing it to tackle various terrains with ease. Exterior-wise, it offers a robust front end with signature LED Daytime Running Lights connected to a prominent inverted trapezoid grille that brings out a strong presence on the road. Meanwhile, the interior boasts more room for each passenger and cargo compared to its predecessor. It has more than 30 cleverly designed stowage spaces and multiple outlets for the modern family.

The very first Ford Everest was launched in 2003 with then Ford Group Philippines aiming to enter the market of AUVs with a true SUV. The second-generation Everest was launched back in the first quarter of 2007. With an all-new design and revamped underpinnings, Ford has improved a lot in the sport-ute to cater to the needs of the local market. It received a facelift in 2009.

In 2015, Ford Philippines launched the third-generation Everest that's now based on the in-house-designed Ranger. It left its roots of being built on top of a Mazda chassis, which gave the midsize SUV its own character. On August 9, 2019, however, Ford Philippines finally brings in the facelifted Ford Everest, powered by the same engine that the Ranger Raptor and Ranger Wildtrak carry.

In 2020, the Ford Everest lineup was added to once again, with a new Trend variant that served as the base or entry-level model that is equipped with the older yet still viable powertrain from the prior lineup of Everests. Ford Philippines then held an official online launch for its mid-level variant, the Ford Everest Sport.

The 2020 Ford Everest was launched with prices that range from P1,995,000 to P2,299,000 and was later expanded with new variants, bringing the starting price down to P1,738,000.  The latest addition to its line up is the Sport which features similar features to that of the Titanium 4x2 but with a price point of P1,868,000 acting as the bridge variant to the Trend and Titanium trim-levels.

The Everest rides on the Ford T6 platform, which is shared with the Ford Ranger midsize pickup truck. For its current iteration, the Everest has a double-wishbone suspension with coil spring and anti-roll bar, while the rear axle has coil spring with Watt’s link, also with anti-roll bar. All wheels are equipped with disc brakes.

Now with the sequential biturbo powertrain setup, the Ford Everest is more responsive and spritely than its predecessor. The early onset of turbo boost was beneficial for those need immediate grunt, while keeping the pull all throughout the 10-speed gear changes. As a result, the acceleration was smooth and by no means lacking, even with the 2.0-Liter displacement engine.

Handling remains dynamic for the midsize SUV as the new Everest retains its electronic power-assist steering system that the nameplate has been known for. Suspension remains pliant and flexible, as well.

The Ford Everest is one of the most technologically-packed midsize SUV in the Philippines today. The Titanium variants feature several convenience features that spoil both the driver and all of the six passengers. Both Titanium variants are similar in tech package offerings, starting with keyless entry, push-start ignition, one-touch power windows, auto-dimming rear-view mirror, dual-zone climate control, 12-volt accessory sockets, AC 230-volt power sockets, reverse camera with parking sensors, and power-adjustable seats. The range-topping Everest Titanium 4x4 variant gets extras, however. It has adaptive cruise control with lane-keeping aid, which is a convenient feature to have when cruising on highways.

For entertainment, the Ford Everest Titanium variants feature an 8-inch Sync 3 touchscreen infotainment system with Apple CarPlay and Android Auto. Sound is produced through 9 speakers, including a subwoofer. Lower variants feature the same 8-inch Sync 3 system, however, the Trend features fewer speakers, while the Sport variant features up to 10 in its cabin. The Ford Everest also now comes with a high-mount USB port making it easier for users to attach a dashcam or any other USB based device that might benefit from the added feature.

The new Ford Everest has a slightly different front fascia compared to its predecessor, which can be seen on the grille and 20-inch wheels. A new color has also been added for this version of the midsize SUV called Diffused Silver.

The Everest Titanium is equipped LED headlamps with auto-leveling and LED daytime running lights. It also has rain-sensing wipers, auto high beam control, and a panoramic moonroof for the 4x4 variant. For those who need to load things into the back of the vehicle will be happy to know that it comes with a hands-free power liftgate. Aside from the new Diffused Silver, the Everest is available in the following colors: Absolute Black, Aluminum Metallic, Arctic White, Meteor Gray, and Sunset Red.

Ford Philippines then introduced an Everest Sport variant which features a new grille, LED headlights with DRLs and fog lamps, black 20-inch alloy wheels, blacked-out side mirrors, roof rails and badging, black skid plates for both the front and rear, as well as a slew of other gloss black embellishments found all over the SUV. The Everest Sport only features four colors, which include core inclusions such as Absolute Black, Aluminum Metallic, and Arctic White. The variant-exclusive color is Crystal Blue.

The fourth-generation Ford Everest has an upscale cabin. Filled with high-grade materials, leather, and soft-touch plastics, this midsize SUV has one of the nicest cabin build quality in its segment. For the facelifted version, the changes are minuscule, which can be mainly found on the gear-shifter that's inherited from the new Ranger and Ranger Raptor. Aside from that, everything's pretty much the same. With the inclusion of the Everest Sport variant the interior of this mid-range model features a leather interior with blue stitching and accents.

As with other midsize SUVs, the Everest has spacious second row but a third row that's better for kids and small adults. What the Everest touts, however, is the ample cargo space when all of the seats folded down to the floor. The range-topping 4x4 Everest variant has a panoramic sunroof as well, which is a nice touch.

Based on our initial testing of the facelifted Ford Everest, you'll definitely love the improved performance that the biturbo setup and 10-speed tranny bring. Of course, the beefy exterior and plush interior will remain as the SUV's main selling point to its patrons in the Philippines.

This version of the Everest isn't without quirks, however. The main caveat of the new Ford Everest is the heightened engine noise that crept into the cabin more than what its predecessor would have allowed.

Connect with the top Ford sales agents in the Philippines. These agents have good reply speeds, process transactions quickly and have good customer reviews 1. All amounts quoted are in Philippine Peso.

2. Resulting computations are based on indicative rates and for estimation purposes only. These do not constitute an approval nor offer by BDO.

3. Actual computations based on prevailing rates will be provided by your Account Officer upon loan application.

4. Maximum Loanable Amount is based on the following:

5. The result shown in the calculator is representative of payments made one month in advance (OMA). Alternative rates will apply to payments made in arrears.

1. All amounts quoted are in Philippine Peso.

2. Resulting computations are based on indicative rates and for estimation purposes only. These do not constitute an approval nor offer by Security Bank.

3. Actual computations based on prevailing rates will be provided by your Account Officer upon loan application.

4. Maximum Loanable Amount is based on the following:

5. The result shown in the calculator is representative of payments made one month in advance (OMA). Alternative rates will apply to payments made in arrears.

Available in: Northern Mindanao & 3 Other Locations

View all available official car promos from across the Philippines.

View the most compared cars versus the Ford Everest

Read our expert reviews, up to date news, video features and road trips. 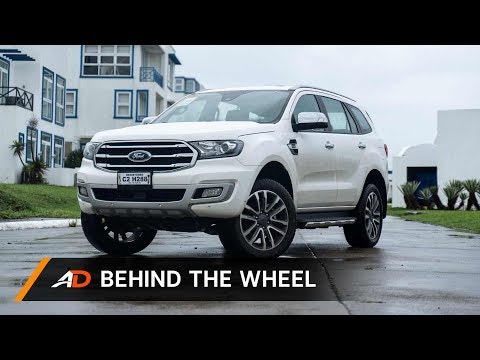 Read reviews from verified car buyers and find out from real owners what it's like to own Ford Everest.

Our Verified Buyer Reviews come from confirmed customers that have had their purchase registered on the AutoDeal platform.

Ask our team of experts any question and we will do our best to give you the best answer possible.

Does the Ford Everest have a sunroof?

Only the Titanium variants with Premium package come with a dual-panel moonroof.

What is the towing capacity of a Ford Everest?

Ford isn't specific with the Everest's towing capacity. However, Ford's website says that it should be able to tow up to 3,000 kilograms, while payload and roof load capacities are at 750 kilograms and 100 kilograms, respectively.

How much does a Ford Everest weigh?

How many seats does a Ford Everest have?

All variants of the Ford Everest comes with three rows and seating capacity for seven people.

What's the most affordable Ford Everest in the Philippines?

Important: AutoDeal.com.ph aims to provide the most accurate and updated vehicle information as possible. However, please note that vehicle specifications, prices, and images may be changed by the manufacturers and dealerships without prior notice. Always test drive a vehicle before purchasing. If you spot a potential mistake, feel free to contact us at info@autodeal.com.ph.

Just One More Step To Get Your Quote

Find out more info, request a brochure, or request a quote by sending an inquiry below

NOTICE: You will be redirected to AXA Philippines website to complete your purchase. Prices and details are subject to change.

Insured Up To :
This quotation is valid only for 30 days

*A standard deductible for private cars will be used (0.5% of the total loss or a minimum of Php2,000). Product features may vary depending on the Motor Insurance Coverage availed.

How does it work?

Benefits of Making a Reservation Online

AutoDeal is the most trusted auto platform in the Philippines, with over 350 official dealers and 12 brand partners.

We have a dedicated support team, so if you have a question send us an email at reservations@autodeal.com.ph

The AutoDeal online reservation service saves you the hassle of having to visit a dealership to start your purchase journey.

Get the Best Deal

Contact a dealer for a quote or inquiry, and receive a quick reply.

Car Of The Week Get Notified for Ford Everest Alerts