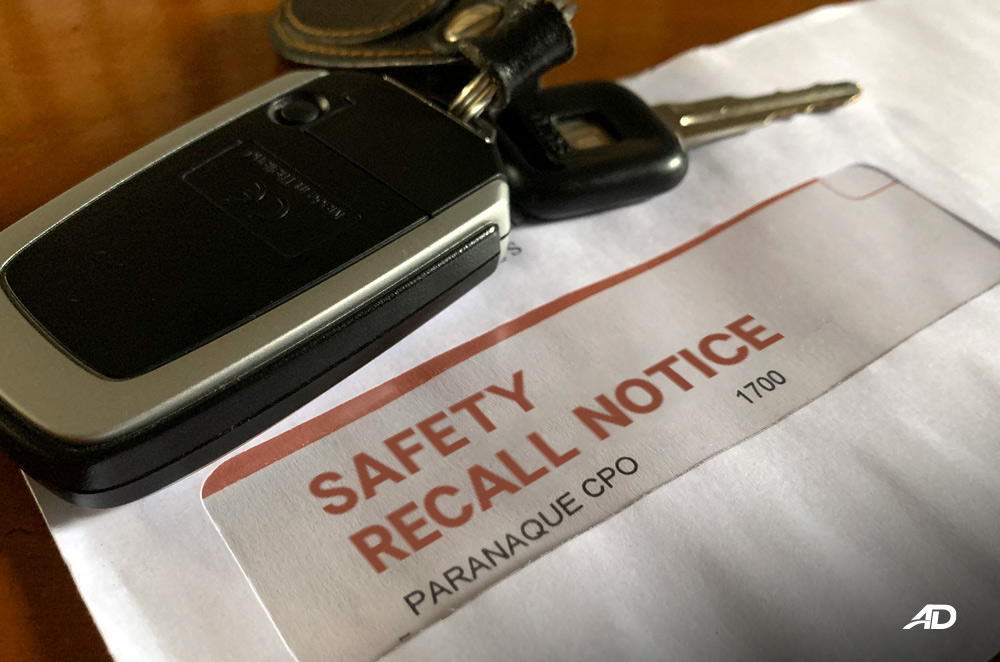 Vehicle recalls are a common occurrence across the globe and represent the automotive industry's commitment to vehicle safety. Under usual circumstances, manufacturers and dealers will notify customers when a recall occurs. However, there may be times when specific owners are unaware.

As such, we've provided comprehensive information on recalls that have occurred in the Philippines over the last year and combined it with some helpful information to tell you what to do if your vehicle was included in a recall.

What is a vehicle recall?

An automotive recall occurs when a manufacturer determines that a specific car model has a defect. This can occur with a single specific vehicle, but typically affects a number of models within a specific manufacturing period. While they may seem like an inconvenience, vehicle recalls should be taken seriously as they serve as part of a manufacturer's commitment to safety. After all, it's better for them to tell you about a potential problem, right?

In a typical scenario, a manufacturer will inform customers to book an appointment for their vehicle to be inspected at an official dealership or service center. Replacement parts and labor related to the recall are usually provided by the manufacturer free of charge. The Department of Trade and Industry also publishes announcements of vehicle recalls on their website.

Why are vehicle recalls important?

Vehicle recalls are important due to the fact that they are often associated with vehicle safety. When manufacturers discover or get repeated reports of similar problems in specific models, they issue a recall to prevent injury, death, and damage to vehicles. They are not necessarily a bad thing, as they validate a specific brand's commitment to ensuring owner safety.

What should I do if I suspect that my vehicle was included in a recall?

If you suspect that your vehicle has been included in a recall, then you should immediately seek the advice of an official dealership or service center. In order to quickly expedite this process, you should locate your VIN number.

What is a VIN number?

Your Vehicle Identification Number (or VIN for short) is a unique 17-digit number identification number that is attached to every vehicle in the world. In basic terms, the VIN is kind of like your vehicle's fingerprint and can be used for a wide variety of purposes. It is particularly important when a dealership or service center needs to check if your vehicle has been in a recent recall. The VIN includes details on the vehicles manufacturing origin, model year, airbag types, engine size, and trim level.

Where is your VIN number located?

BMW Recalls in the Philippines

Asian Carmakers Corporation, the official importers of BMW in the Philippines issued a technical upgrade recall in May 2017. The recall was issued to address issues on airbags and ISOFIX systems on year models from 1999 to 2016. The potential airbag defect includes a possible issue with the gas generator which may cause metal fragments to be fired when the airbag is deployed. The ISOFIX issue is said to have been triggered due to a problem with the strength of their rear seat fixing brackets.

Affected models of the airbag recall are:

Affected models of the ISOFIX system recall are:

Honda Recalls in the Philippines

In December 2015, Honda Cars Philippines Inc issued a voluntary preventative recall for specific models of the Honda City and Honda Jazz in relation to a required update of the Electronic Control Unit (ECU) software.

It was found that the current software installed on the models may cause high stress to the Drive Pulley Shaft located inside the vehicle’s Continuous Variable Transmission (CVT). The consequences of not having the software updated could lead to serious damage to the vehicle. Honda has advised owners of affected units to have their vehicle inspected by an official Honda dealership or service center.

Honda Cars Philippines Inc. (HCPI) issued a recall in March 2017 as a precautionary measure against a potentially defective airbag inflator on Takata airbags on specific units of the Honda Jazz, City, and Pilot. A total of 10,461 units were expected to be affected. HCPI advises all owners to have their vehicles inspected at an official Honda dealership or service center nationwide.

The Honda Takata airbag recall affects the following vehicles in the Philippines:

As a matter of ensuring maximum vehicle safety, Honda Cars Philippines Inc. announced a recall for specific units of the Honda Accord, Civic, CR-V, City and Jazz to ensure that still they still maintain good safety standards. In particular, the recall aims to address a suspected defect in the inflator of the passenger front airbag. Although there were no reported accidents at the time, Honda wanted to ensure the safety of owners and advises customers to contact and set an appointment with the nearest Honda car dealerships and/or service center to have the said vehicles inspected.

On June 11, 2020, Honda Philippines issued a recall for 10,136 of its vehicles for a faulty fuel pump impeller. The recall affects units under the 2018 to 2019 model years. In its announcement, the brand made mention of replacement kits, and assured customers of quick service, not lasting more than one and a half hours. Fuel pump issues will need to be addressed as soon as possible, and Honda Philippines implored its customers to use its website to check their vehicle VIN and chassis number and encode it on their recall site in order to determine if their vehicles are affected or not. Honda Cars Philippines June 2020 safety recall affects the following units:

Mazda Recalls in the Philippines

Much like Nissan, Honda, and Mitsubishi. Mazda Philippines also issued a precautionary recall over potentially defective Takata airbags. Owners of any of the affected models have been advised to have their vehicles inspected by an official Mazda Philippines dealership or service center.

Mazda Philippines issued a recall in October of 2020 for a fuel pump motor recall. The Japanese brand has already contacted affected owners and has stated that the replacement of the faulty part will take about two and a half hours to complete. Affected models are the following:

Mitsubishi Recalls in the Philippines

Mitsubishi Motors Philippines Corporation (MMPC) initiated a safety inspection campaign in September 2018 for specific models of the Mitsubishi Pajero, L200, Strada, Lancer, Lancer Evolution IX, and Fuzion. Owners of affected vehicles have been advised to have their units inspected by an official Mitsubishi dealership or service center.

The precautionary campaign was initiated to check for faulty Takada airbags, similar to other campaigns initiated by Honda, Mazda, and Nissan.

Mitsubishi Philippines issued a recall to all Xpander owners who have bought their units from May of 2018 until October 31, 2019. Owners are advised to bring in their units in for inspection and replacement if the fuel pump is found to be faulty.

Nissan Recalls in the Philippines

Nissan Philippines Inc. urged Nissan owners to have their vehicles checked for potentially defective airbags in February 2019. This recall was issued in relation to a defective component in the Takata airbag inflator, which could malfunction when deployed. This is a similar recall to what was also called by Honda. Owners were advised to check with an official Nissan dealership or service center to see if their vehicle was affected by the recall. Affected models of the Nissan Takat airbag recall include:

Subaru Recalls in the Philippines

Subaru issued a global recall at the end of 2018 to cover valve spring issues for vehicles manufactured from January 16, 2012 to May 14, 2013. The recall was described as precautionary and was required to prevent the valve springs from fracturing under stress which would result in a noise coming from the engine, stalling, or an inability to start the vehicle.

Motor Image Philippines advises owners of the units mentioned below to have their vehicles inspected by an official Subaru dealership. Parts will be replaced free of charge. The Subaru global valve spring recall affects the following units based on their manufacture year:

In addition, a second recall was also issued at the time in reference to inaccuracies with the multi-information displays, which affected the following vehicles:

Toyota Recalls in the Philippines

Toyota Motor Philippines (TMP) issued a recall of the Toyota Rush in July 2019 based on concerns over the Curtain Shield Airbag computer on selected units manufactured from April 2, 2018, to February 7, 2019.

As per an official statement from TMP, the said units may have issues with the programming of its respective airbag Electronic Control Units (ECU), which may cause the curtain shield airbag to deploy when the rear wheel passes through a pothole or dent in the road.

Affected units will be informed through an official notification letter. Those who received such a letter are informed to schedule their Toyota Rush to be inspected by any of Toyota’s registered dealers or service centers nationwide.

Toyota Motor Philippines issued a recall for the first generation of the RAV4 in February of 2020. The recall was issued over concerns about the airbag inflators being insufficient or being too powerful causing a rupture. Affected units are those that were bought from June 6, 1997, to August 17, 1999.

Affected units will be informed by an official notification letter sent out by the Japanese brand. The airbags will be replaced by Toyota free of charge.

Toyota Philippines issued a special service campaign for certain models bought from 2013 and 2019. The recall was for faulty fuel pumps that would fail to cause the vehicle's engine to run rough, lose power at lower speeds, or not start at all.

affected units and year models are the following:

Ford Recalls in the Philippines

Ford Philippines has issued 2 recalls for the Ranger, Everest, and Mustang in September of 2020.

All Ford Mustang units: The recall was issued for possible brake pedal bracket failure. These brackets could break under hard stopping conditions which could lead to the loss of the vehicle's braking abilities. Ford has contacted local owners of the American muscle car for possible issue.

All 10-speed automatic Ford Ranger and Everest units: The recall was issued for the possible 10-speed automatic transmission pump gear failure which could lead to the vehicle being immobile. Ford has already contacted affect owners and states that repairs as well as parts replacement will take a day to complete.

Chevrolet Recalls in the Philippines

On November 6, 2020, Chevrolet Philippines issued a recall for select models in its local lineup that may have been affected by faulty Takata airbags.

The following models are affected by the recall:

Chevrolet highly encourages owners of these vehicles to log on to their website to schedule an appointment. The inspection and repair service is free of charge and will take approximately 1hour to perform and complete.